On April 19, 2015, China formally announced the commitment of $45.6 billion in funding for infrastructure projects across Pakistan during a meeting between Chinese President Xi Jinping and Pakistan‘s Prime Minister Nawaz Sharif in Islamabad.  Officially named the China-Pakistan Economic Corridor (CPEC), the project is a key component of China’s Silk Road Economic Belt or ‘‘‘One Belt, One Road‘ initiative.  China originally promised the investment last November and is seeking to extend its influence in the region through aid and investment.  Beijing‘s goal through CPEC is to access Central Asian energy resources and provide a transit route for Chinese goods to the Indian Ocean via Pakistan‘s ports.   Naturally, the agenda also has important strategic, security and military dimensions for Beijing, piggybacking on a long relationship with Pakistan that has been multifaceted.

Of the $45 billion, $33.8 billion is intended for energy projects and $11.8 billion for transportation projects that are scheduled for completion over the next six years.  Financing for the investments will come primarily from China Development Bank (CDB), Industrial and Commercial Bank of China (ICBC), Asian Infrastructure Investment Bank (AIIB) and the Silk Road Fund.  Beijing is claiming that the projects will be financed in such a way as not to add any new debt to the Pakistani government.

On Monday, April 20, 2015, President Xi unveiled a $28 billion infrastructure investment package to kickoff CPEC.  The announcement was seen by many as a kind of ‘‘‘down payment‘ and included projects already underway that China has effectively rebranded as falling under the CPEC umbrella.  The following is a list of CPEC‘s inaugural projects and the Chinese companies assigned to them.

- China Three Gorges Corporation (Sanxa) is constructing the 720-megawatt (MW) Karot Hydropower Project in Rawalpindi, which is to be financed by the Silk Road Fund: $1.65 billion.

- Karakoram Highway will be constructed, linking Islamabad and Havelien: $930 million.

One key element of CPEC is the Karakoram Highway, a 1,300-kilometer (km) (800-mile) road, which runs from Kashgar, China to just outside Islamabad.  The road was a ‘‘‘gift‘ from the Chinese and was constructed during the 1960s and 1970s.  Currently, a mix of Pakistani and Chinese workers is paving the road in order for it to accommodate trucks carrying 40-foot containers.  Security surrounding the work is tight as it is considered a strategic asset to both countries.

China‘s investment projects are not without security concerns.  A long-running separatist insurgency, named the Baluchistan Liberation Army (BLA), is still active in Pakistan‘s impoverished Baluchistan province and has attacked gas pipelines and railway lines in the past.  Similarly, China is worried about Muslim separatists from Xinjiang joining forces with the BLA and other Pakistani militants.  Finally, the Karakoram Highway travels through Pakistan-administered Kashmir, a still-disputed territory with India.  All three raise serious questions about the feasibility of CPEC.

Below is a map illustrating the locations of a number of the projects and road infrastructure described above.  Reportedly, the provincials of Pakistan — Lahore, Peshawar, Karachi and Quetta — are the agreed upon nodes of the CPEC. 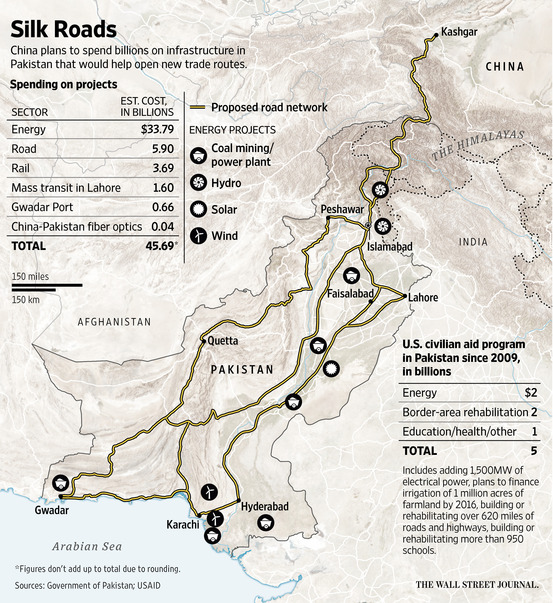