In the wake of the failed coup attempt in Turkey, Russia expressed its interest again this week in reviving an alternate transit route for oil exports to Europe (i.e., the Burgas-Alexandroupolis pipeline that would circumvent the Turkish Straits via an overland route from Burgas, Bulgaria to Alexandroupolis, Greece).  The CEO of Russian pipeline operator, Transneft, announced that they had resumed talks with their Bulgarian and Greek partners to revive this pipeline project, which was shelved for various reasons in 2011 primarily due to concerns raised by Bulgaria.

The Bulgarian government reportedly expressed an interest in preserving Trans-Balkan Pipeline BV, a Dutch-registered joint venture originally set up in 2007 to execute this project.  This company was established as a joint venture between Bulgaria‘s Bulgargaz, Greece‘s Hellenic Petroleum, and Russian energy companies, Rosneft, Transneft, and Gazprom.  Russian entities preserved a 51% interest — and operational control — over the entity.  The $1.8 billion pipeline would transport up to 250 billion barrels of oil per year from the Black Sea to the Aegean Sea, circumventing the Turkish-controlled straits that transit 3% of the world‘s oil.

The realization of this project would carry strategic benefits for Russia, including the influence it would have over Bulgaria and Greece in the form of transit fees as well as the hedge it would offer Moscow over the sometimes turbulent political climate in — and bilateral relationship with — Turkey.  Indeed, the recent coup attempt led to the brief closure of the Bosphorous Strait. 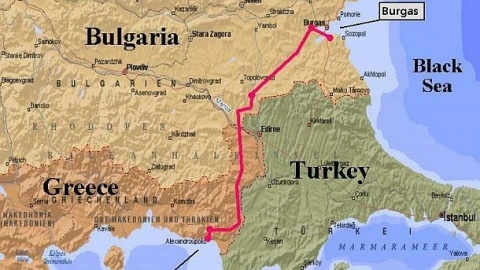